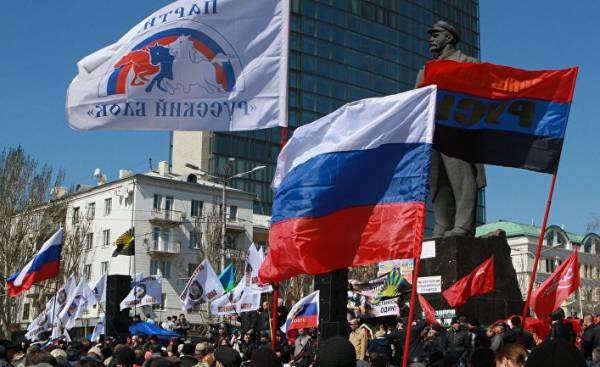 As I wrote earlier, the suicidal logic of the Kyiv authorities leads to the collapse of the country. And with each passing day, this collapse becomes more noticeable.

After reports on the introduction of sanctions against Russian banks Sberbank (the seventh largest in the country) stated its intention as soon as possible to leave the Ukrainian market, that is, escape from economic, financial and political swamp that has become Ukraine.

This news has become a bad signal for Ukraine, because that means capital flight, tax losses, the abolishment of 2 thousands of jobs, and loss of investment, which the country desperately needs.

This is not to mention the international image of the state and the position of other banks, which can, at least, to stop investing in former countries like Ukraine, or, as a maximum, to follow the example of Sberbank. If the Russian Bank will withdraw from the Ukrainian market, the entire banking sector can expect a fatal collapse as a result of the Domino effect.

And news from the IMF are unlikely to return to the faces of the Ukrainians smile. The fact that after the legalization of the Ukrainian government complete blockade of Donbass (originally the initiative of the Nazi group), the IMF has deleted from its programme the planned negotiations on granting Ukraine the next tranche.

In other words, promised Ukraine a billion dollars was in limbo, because, in the opinion of the Fund, the blockade drastic changes of macroeconomic parameters of the country. The IMF understands that the blockade will drag Ukraine back to the bottom, and requires it to review its copy of the agreement to provide billion.

That is, to get a handout, Ukraine will have to take off the last, after the pension reform and the sale of agricultural land. Thus, the MEP from Latvia was surprised to find that in her country are sold in packages of Ukrainian black soil as compost.

The first Ukraine had conceded the land to the agribusiness, who wants to sit there GMOs, and now sells its precious land to European countries to EU residents grow better in the garden tomatoes.

At the sight of this news, one wonders whether it is actually or in a kind of nightmare. What will be the next step of Ukraine after the “revolution of dignity” (and where it is the dignity if the country sells the land as compost)? Than start trading Kiev? Its own population?

In the midst of all this putrid swamp Poroshenko, which the IMF poke his nose in mismanagement, is now trying to relieve themselves of responsibility. It’s too late woke up and said that given the common border of DNR and LC with Russia blockade of the Republic only encourages them to Moscow and further from Kiev.

Bravo, Watson, except that you pondered too long. The damage is already done, because you need to think before you do, and not Vice versa. Now it’s too late to say that staged a blockade of neo-Nazi groups will have to answer for their actions. They have not answered for their crimes after independence, and it would be naive to think that will change now, when the Ukrainian state is falling apart, and the remains of its small credibility melt like snow in the sun. Ukraine is becoming a neo-feudal state, as predicted Tatyana Montyan.

Proof should be sought in the Village of Lugansk, the only active checkpoint between Ukraine and LNR. Holding his Nazi battalions to artificially create endless queues since the introduction of the blockade, and then sell to them. The initial amount of 200 hryvnia. The result is some people have to spend several days waiting for opportunities to pass. Pure cynicism that no one else can punish.

Ukraine continues stupid provocations and attacks. Yesterday two groups of the Ukrainian army tried to break through the defensive positions of the DNI in the South of the Republic of Kominternovo. It all ended in tears: 12 dead and 14 wounded on the Ukrainian side. Were also destroyed two APCS and one tank. From the DNR yesterday losses amounted to three dead and two wounded.

Moreover, these attacks are unlikely to disappear, once more the officials in Ukraine, openly declare that the conflict in the Donbas will be resolved not by diplomacy, but by force of arms. For example, Yuriy Bereza from “popular front” called for the establishment of a strong Ukrainian army to defeat the Donbass.

However, these lovely fantasies can face the cruel reality: 78% of Ukrainians are ready to support the separation of Donbas, if it will put an end to the war. That’s not counting the fact that with the increasing integration of Donbass with Russia a large-scale attack of the Ukrainian army can meet not only the people’s militia.

The fact that after meetings in the Crimea with the participation of Alexander Zakharchenko, Igor Plotnitsky and Russian officials, when the head of the DNI has expressed confidence about the future integration of the Donbass to Russia, the foundations of this process are beginning to be laid.

So, in continuation of the proposals on trade-economic cooperation between the Crimea and Donbass two unrecognized at the international level, the region decided to form a joint venture to facilitate trade relations despite sanctions.

Economic Union in the Crimea-Donbass will work on the lines of the Integration Committee of Russia-the Donbass, which was created following the meetings on the Peninsula.

To highlight the work of the Committee was launched on the Internet site. In the first session on March 17 Alexander Zakharchenko said that the organization is planning more than 500 cultural and sporting events. In addition, he stressed that the DND economy is growing and is looking for markets in Russia.

Thus, the process of gradual integration of Donbas into the Russian Federation started. At first it will be economic, social, cultural and humanitarian character. Then it will expand until the Donbass will not complete the same way as the Crimea three years ago. As Crimeans, residents of Donbas will certainly be pleased with the choice and opportunity to leave the “raft of the Medusa”, which has become Ukraine.