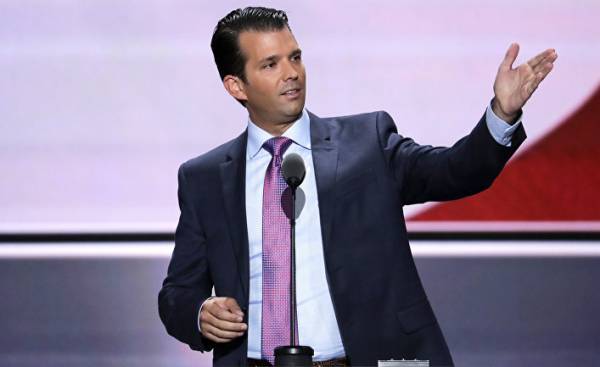 Modestly covered in the press the visit of Donald trump Jr. in Paris on 11 October 2016 at the invitation of the unknown analytical center close to Russia today raises questions. In a time when the relationship between Moscow and members of the election team trump become the subject of investigation in the US, this visit of the eldest son of the presidential candidate, playing a prominent role in the command of the father, could become an additional channel through which the Kremlin has prepared the coming to power of Mr. trump.

In early March, the company Trump Organization has not denied the information that appeared in the Wall Street Journal, according to which Donald trump Jr. could get 50 thousand dollars for their presence at the round table at the Ritz. White house adviser, Kellyann Conway (Kellyanne Conway) have tried to minimize the significance of this event, explaining that he participated in the discussion of people of different beliefs. In fact, trump Jr. was the chief guest among the thirty participants.

Questions on this visit relate primarily to the identity of the organizer of the meeting Frenchman Fabien Bossara (Fabien Baussart), 44-year-old businessman, who in 2006 created and founded the Center for political and international Affairs. In an interview with Le Monde, Mr. Bossar claims that “nobody asked him anything to organize and invest any money”. He also assured that the issue of Western sanctions against Moscow were not discussed, including during lunch in a close circle, which preceded the event.

A network of personal ties with Russia this man, remaining in the shadow, formed long ago. In the early 1990-ies, however, Bossar moving closer to rich businessmen from Russia and also from Ukraine and Kazakhstan, posing as a trusted entity willing to provide services to potential small business partner. Among these oligarchs were Russians Boris Berezovsky, Sergei Pugachev, Alexander Lebedev and Ukrainian Igor Voronin and Dmitry Pinchuk.

Before the interlocutors Bossar flaunted their contacts with the most senior representatives of media, political and business circles of France that allowed him to appear in the eyes of Russian is extremely useful and an important person. “It was presented to me as legal adviser to Jacques Chirac,” recalls one Russian businessman who had an affair with Brossard in the late 1990-ies and considers it “a crook who wanted to be closer to the levers of power, revealing himself not as he really is”. According to two reliable sources, the internal intelligence of France, he was a useful contact, and the Directorate of foreign intelligence regarded him warily.

The establishment of the Centre for political and international Affairs, Vice-President of which is the publicist and previously belonged to far-right forces Alexander del Val (Alexandre del Valle) is part of his strategy. “Of course, it didn’t hurt my business, it is primarily about selfless interest in geopolitics,” says Fabien of Bossar. Using the Center, the businessman invites you to come to Paris different leaders, often out of the business, such as Tzipi Livni (Tzipi Livni), former Minister of foreign Affairs of Israel, or of Yannis Varoufakis (Yannis Varoufakis), the former Minister of economy of Greece. At the meetings, which take place exclusively in the palaces, and invited people of different beliefs, from diplomats to politicians. One of the patrons of such events is General Puga Benoit (Benoît Puga), the President’s chief of staff Nicolas Sarkozy and Francois Hollande.

However, the star of Russian and Ukrainian friends, the oligarchs, Mr Bossara went out. Today, he refuses to call their new customers. “I’m not a supporter of transparency. In the end, I don’t sell rockets”. This is particularly relevant to the transparency allowed him, Italian citizen, register your analytical centre in Hong Kong under the status of a commercial enterprise.

With the coming to power of Nicolas Sarkozy in 2007, created a new Russian network, headed by men like Alexander Djouhri and Jean-Pierre Thomas (Jean-Pierre Thomas). Owner Bossar couldn’t get into these networks, even after the rapprochement with Claude Gean (Claude Guéant), the head of administration of the Elysee Palace from 2007 to 2011, and his role becomes less important for Moscow.

With the departure of Sarkozy, Bossar breathed a sigh of relief. 6 may 2012 he organized a election party in Bristol hotel near the Elysee Palace. For non-payment of 17 thousand euros, the hotel began against him the trial. Greed or financial problems?

2012 was a turning point in the fate of Fabien Bossara thanks to one woman. His first wife Muse Turinawe, the Russian woman, who arrived in Russia in 1970-e years, has facilitated the establishment of his ties with Russia, is now in the same way his new wife Randa kassis (Kassis Randa) introduced him to the Syrian dossier, which brought him back to the Kremlin.

This 46-year-old Syrian with French nationality, was born in Damascus into a Christian family, in August 2012, she was expelled from the National coalition for Syrian revolutionary and opposition forces (CNS), which unites the various currents of the Syrian opposition. Its position in favor of the political transition, with President Bashar al-Assad annoy other opposition forces and unite it with Russia, an ally of Damascus, whose military intervention in October 2015 she strongly supports.

Randa kassis is closely associated with Sergei Lavrov — said Joseph Bach (Joseph Bahout), an expert on Syria and a visiting scholar of the Washington-based Carnegie center. He would prefer to represent it as one of the most important representatives of the opposition, which Moscow now treats. “I was able to convey to Donald trump through his son the idea that we can cooperate together to achieve agreement between the US and Russia on Syria,” she would write on his Facebook page after a visit to Paris, Donald trump, Jr.

This closeness couples with the Russian regime may have also helped to revive the business of Fabien Bossara. But not necessarily, in spite of new contacts, in particular in Azerbaijan. Recently, people changed the strategy. In October 2015, Bossar along with Cassis was awarded the prize CPFA “the struggle against terrorism” Chechen dictator Ramzan Kadyrov. In September 2016, he advertised himself as the organizer of “peace talks” between Armenia and Azerbaijan… and will not take place. The culmination of the new demonstrative strategy Bossara was that in December of 2016, he nominated Vladimir Putin for the Nobel peace prize is “a provocation against the background of current anti-Russian hysteria” made it.
Invitation trump Jr. fits into the framework of the return of Basara to their old ways, that is purely advertising gimmick? Do you “rent” a trump, Jr. online. On the Internet site which offers service details, his sister Ivanka are also available for invitations, if you are willing to pay at least 100 thousand dollars. As Bossar sent an invitation to James and ruby (James Rubin), chief Advisor of the former candidate in US presidents from Democrats Hillary Clinton.

Can be Bossar turned into direct or indirect mediation of the Russian authorities, wanting to establish as many contacts as possible with loved ones of Donald trump? If he anticipated their desires, seeking to impose a small business participant’s dark ties through which at times is a kind of secret diplomacy? In late November, Cassis admitted to The Wall Street Journal that said in Moscow, in particular Deputy foreign Minister Mikhail Bogdanov, on his links with the son of Donald trump.