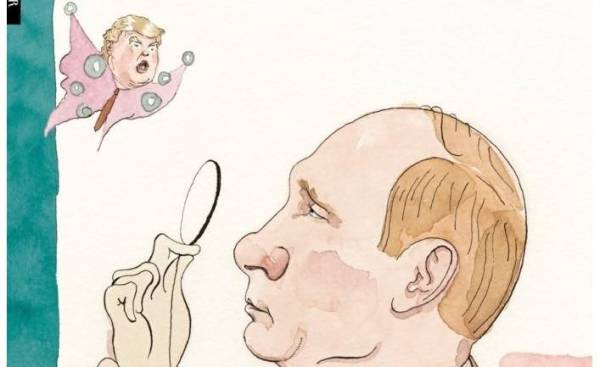 When the presidents of the two countries with sufficient resources for multiple mutual destruction, have equal intelligence and Outlook, when, besides, in the mind of each about the same, it would seem, to relax, Recalling the experience and read.

But this is not the writing fraternity. Is released the intellectual space at the helm of the United States, as there rushed “our rush”. God forbid, not in the face of the world’s best hackers and the most stupid in the world of media in the service of the KGB, all these tence and Lexus. No, Russia was forced to admit in the American news space, the Americans. 6 March 2017 name of one of the most influential magazines of the United States, the New Yorker, will be printed on the cover in Cyrillic — the new Yorker. Moreover, shock cartoon would represent us in the highest degree mysterious sight. The main character will be the character who is terribly reminiscent of Russian President Vladimir Putin in an outfit of Vladimir Nabokov the entomologist and the Amateur, which examines a flying butterfly or pixie smacks of US President Donald trump.

At the sight of this strange message will not go in the Wake of the “fake news” about the relations of the President of trump with the Russian state authorities, they are the same intelligence agencies, because the country, led by the security officer, all civil servants become insensitive security officers. Want, and just need to think further, and, frankly, run far away from the meeting place of these butterflies and peasant. While they only exchanged remarks about each other, but there will come a time when they have to meet, to talk.

The first thing that will make these giants of thought? Yes classify the conversations-negotiations. A giant mind, which is endowed with both the national leader, let them may play in the so-called cheating with their media.

After all, what do smart rulers with their papers? Properly, if you can’t subdue, limit or eliminate.

Everyone is asking how they will understand each other? Somehow get along? Isn’t it too early goes American literary magazine of the Cyrillic alphabet? Do a hundred million Americans, in addition to Spanish, Chinese and Japanese have to learn one more Russian?

Exactly two hundred years ago the great German romantic E. T. A. Hoffman wrote on the subject a whole book with astonishing meticulousness studied the nature of linguistic diversity. However, the people-readers of this book should have been from the very beginning to accept the fact that to read something you have written and cat. In the treatise “the Idea and the Instinct, or the dog and the cat,” Murr presented the theory of language, around which still puzzled the philosophers. The basis of this theory — the notion that all languages are the same language. SAXS shows this identity on the example of his own friendship with the poodle Ponto. At first, the cat is afraid of a poodle, but after hearing from the owner that the dog is not going to set the cat bashing, and is only to happy in this game included. Moreover, it is easy once you have mastered the language of the people, the cat begins learning the language of dogs — or rather, podlinnogo dialect. In this case, although the dog and a somewhat simpler, it still was a source of great trouble for the cat. Ponto stole the manuscript Murra, from which, among other things, the characters, and with them the readers, remove unpleasant knowledge: cats spying on people!

People to such an extent sure of your intellectual superiority over the animals, constantly getting into a mess. And, faced with a representative lower than themselves, the kinds of living creatures believe, without any reason that they will be able, as it is sometimes expressed by the people “to keep everything under control.”

However, this is a mistake, and in the end, the winner of the fight can easily be the one who mind itself failed, and the other tries not to let on his mental horizon. Why is this happening? Whether not therefore, asked the cat Murr, studying foreign languages too quick and think in those other languages! But learned the words of others — forced words. Before the wretched and lewd simple idea expressed in a foreign language that I think it gradually forget how good, fun and varied you can think of on the native language, at that, who always know best, of course, if your whole life is enriched. The cat Murr already in 1817, knew perfectly well how devilishly dangerous it is to succumb to what he would call “padalinys simplification”.

When the complex historical relationship between cats and dogs are reduced to establishing control over the borders and bowls of chicken bones, a merry life in the attics and in basements turns into an endless series of wars. Which cat is bigger thief and rogue, he is a hero, and role model. More advanced beings can rarely teach a more primitive individual to speak and think in their language, but the reverse happens at each step. For example, a dog who loves to jump over a stick or to pull master cap out of the pond, easily adjusts to your way of inveterate wisdom and poet.

President Donald trump sometimes compared to President Ronald Reagan. They say they are both conservatives, both had to confront the establishment, both for many years appealed to not to provide the electorate with television screens. And the language of both, they say, so simple. Reagan made history two mottos. One was Russian, the other addressed to the Russian. The first motto sounded in Russian with an American accent: “doveryay, no proveryay”. Not that it was easy to appeal to the Americans in Russian. The second theme was a proposal to Mikhail Gorbachev to “tear down this wall” (meant, of course, the Berlin wall). Both commandments, perfectly worked in the late 1980s, the “new Reagan” tramp immediately broke. Although some Americans today think that chose the “new Reagan” after eight years of stay in power the “new Jimmy Carter”.

But the “new Reagan” spoke to America and the world in the language of “control” and “absolute security.” Instead of Reagan’s “tear down that wall!” sounds terrible “let’s build a wall on the border with Mexico.” And the President of the Russian Federation the President of the United States trusts more clearly than their American media and the opposition Democrats.

The main enemy of the United States, in the imagination of a new President, “the fake news”, which announced some major American mass-media. Among the first — and CNN, through which the whole world watched live for coups and the seizure of hostages in Russia. This new “Empire of evil” of ISIS (a terrorist organization banned in Russia — approx.ed.) and his assistants.

But why on the cover of the new Yorker ingenious lightweight butterfly flutters before the serious entomologist? Is it because the entomologist, Amateur mysterious utterances, one hand stroking his addition to the ranks of ISIS, and the other spurs ranks of the fighters against ISIS? No wonder that butterfly as being more simple not able to understand some more complex games your Explorer. But then the victory in the confrontation may not be at the heavenly butterfly, not a pink elf with a red tuft, and a strange man with a magnifying glass and a butterfly net.