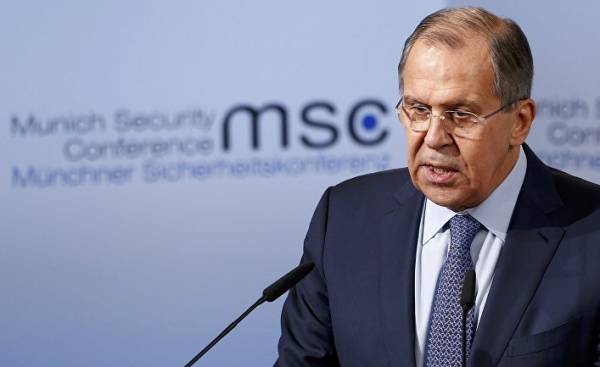 At the end of last week at the Munich security conference, which was attended by Prime Minister Binali Yildirim (Binali Yıldırım) and many world leaders began to appear the outlines of a new picture of a multipolar world. Those who follow the development of events, remember that on 10 February 2007 in this conference, Russian President Putin made a historic speech. To better understand today, you have to remember this speech and the ensuing events.

Ten years ago, Mr Putin condemned NATO’s expansion to the East. He said that the promises made to Russia had not been implemented, and stressed the unacceptability of a “unipolar” world order “under US leadership”. In that speech Putin, focusing on the growing military power of Russia gave to understand that Russia is “strong enough to challenge the West”. In Turkey it was expected that some expert for international Affairs will review this statement and prepare realistic proposals for their country. The specialists of “German school” in Turkey are unable to do this, while the Americans understood Putin, but failed to correctly calculate the balance of forces.

After Putin’s warning in 2007, threats against East by Western forces has intensified. They are increasing their military presence in the Baltic countries and Poland. Restricted the political rights of Russian-speaking population in the Baltic States. Carried out maneuvers in Georgia and, in the end, Ukraine in a coup overthrew the government, pursuing a balanced policy. Russia was constantly troubled in Eastern Europe.

The snare, which the United States was placed in the middle East during the Arab spring in 2011, actually aimed to encircle Russia from the South. Moreover, the West, putting pressure on Turkey through terrorist organizations that sought to drag her into a war with Russia. Vital to the globalist structure was the encirclement of Russia and the scrapping of its military power. Because in the UK and the USA, where nestled the globalists, any internal tension. And if in the middle East and in Eastern Europe things went bad, the balances would have changed, and the prevailing statist, isolationist tendencies.

It is in these conditions in Turkey, the unthinkable happened event. Was shot down by a Russian plane, Turkey and Russia came to the brink of war. As long as the state took a clear position of the Turkish society, of course, was supposed to be on the side of his army and government, but always had questions.

Why two months until 24 November 2015, when it was shot down by a Russian plane, Germany launched missile complexes “patriot”, which was deployed on the Turkish-Syrian border? She knew what would happen? While the 60-year history, NATO was not hit by any Russian aircraft, this incident just happened in a period when Germany and Russia were at odds with each other?

23 February 2016, the EU representative for foreign policy Federica Mogherini (Federica Mogherini) said the following: “We have always believed that Syria is a proxy war between regional actors. The current situation could degenerate into something more. I’m not talking about the cold war. No, there is a risk of a hot war between the various players. And it’s not necessarily Russia and the United States, it can be Russia and Turkey.”

Obviously, at that time, Turkey was actively involved in the war. This war was the last chance for the globalist structure, is not able to cope with a rising Russia. But the Turkish state with 2500 years of history was not supposed to fall for this hook West. Therefore, after the implementation of the necessary changes in the government’s plan to involve Turkey in the war with Russia was disrupted. For the West, which realized that will not be able to involve our country in war, his secret fraud, the only remedy was a coup.

Lavrov summed up the results

The main purpose of the attempted invasion of Turkey July 15, 2016 was the creation of a new conflict between the Turkish government and Russia. When this did not happen, the globalists in the United States was deposed, and there was a new world situation. The words of the Minister of foreign Affairs of Russia Sergey Lavrov at the Munich security conference seemed to have confirmed the fulfillment of the prophecies, which ten years ago Putin did: “the Overwhelming hegemonic system created by the Western elite club of countries, the liberal world order come to an end. Responsible leaders must make a choice. I hope that the choice will be made in favor of a democratic and equitable world order. If want to call this new procedure “postzapadnoy”. NATO is a cold war relic that does not need to insist”.

The Munich conference witnessed the defeat of the West. Among the reasons for this fact is extremely important is the failure of the CIA during coup attempts, terrorist organizations FETÖ of Fethullah Gulen (Fethullah Gülen) in Turkey.

The Hostility Of Germany

Here should be mentioned the situation of Germany. During the rule of the globalists under US hegemony, especially during the reign of the Obama — Merkel Germany was entrusted with the mission of interfering in the Affairs of Turkey. In the most important foreign policy orientation of Turkey’s last word, as always, rested with the United States, but especially in domestic politics and everyday practices in an active role had to play Germany. That is why Germany had an influence on “the people of the USA in Ankara”. Now, when this period comes to an end, Germany is largely losing its influence in Turkey, its most important trump card in the region.

As the Germans are unable to swallow it, they are now trying to take revenge on Turkey and mainly to President Erdogan. In the media, statements by politicians, they are even neglecting diplomacy, demonstrate the famous German arrogance. But all this empty sound. Mode Merkel and so short-lived, after a few months he will go too. Welcome to postzapadnoy world order.

NATO’s borders as Russia has brought to life his most terrible dream (editor-in-chief, Ukraine)