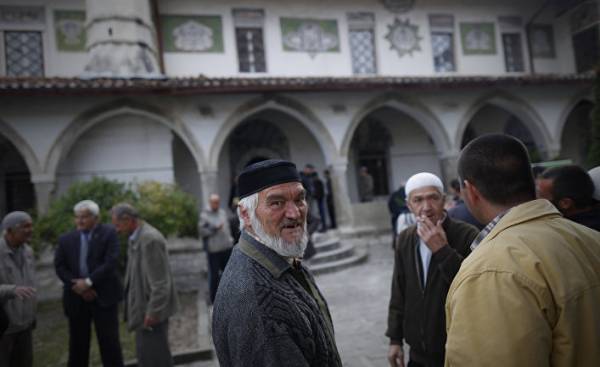 It turns out that a volunteer battalion of Crimean Tatars exists and with him quarreling representatives of the Ukrainian army. On the South of Kherson region a conflict occurred between the Ukrainian military and Crimean Tatar volunteers who create their battalion. The parties are referred to different versions of what happened and assure that the conflict has been exhausted.

Not clear remains only what you do armed Tatars near the Ukrainian border, and why the Ukrainian military decided to attack them. Корреспондент.net understand the situation.

The Chairman of the Majlis of the Crimean Tatar people Refat Chubarov said that the beginning of the incident was unprovoked and the force occupation soldiers a public organization “Asker” of the territory, which are based fighters formed the Crimean Tatar battalion. Of Noman Çelebicihan.

According to him, on a place of incident worked the representatives of the National police and the security service.

However, why in the APU decided to occupy the territory of the “Asker” and where did this organization actually controlled territory, Chubarov said.

The coordinator of the campaign “Civil blockade “of the Crimea” Lenur islyamov said that military exercises conducted in the vicinity of the seat of the organization “Asker”, which was not alerted to the intentions of the army.

“No one informed the Asker did not put. They saw that near them, in close proximity, people in balaclavas doing something. There was a verbal conflict which ended with the destruction of property “Asker” — said islyamov.

The struggle for market

“The seizure was led by a drunken major, who complained to a local entrepreneur — the owner of a cafe and market on Chongar. “The Tartars seized the plot of land and located on it the blockade,” — said the businessman chosen major. So, without thinking, the major decided to restore justice, has raised the soldiers and the soldiers began to liberate the Armenian entrepreneur from the Tatar yoke,” wrote a journalist of Crimean-Tatar channel ATRОсман Pashayev.

In fact, the location of the new battalion blocks the border fish market.

The operational command “South” reported that on the units that perform combat tasks in the Kherson region on the border with the Crimea, tried to attack the representatives of the illegal armed formation.

“Subdivision, part of military units of expeditious command “South” and perform combat tasks in the Kherson region, on the border with Crimea, was built by order of the commander of a combat position. During the implementation of the necessary list of works on the position of maximum profit, the armed representatives of the illegal armed formation”, — stated in the message war.

The statement said that representatives of the armed group were detained and disarmed.

The Arsenal of weapons

On the basis of the Crimean Tatar battalion was discovered an illegal cache of weapons, said the Country’s ex-Deputy head of national police in Kherson region Ilya Kiva.

According to him, the military went to the base to check the information received about unregistered weapons.

“It was revealed about 50 “Flies”, more than 60 ammo zinc (one zinc 600 rounds), were the explosives found TNT, Kalashnikov assault rifles, about four guns PC. Found even the American rifle M16,” — said Kiva.

According to him, discovered an illegal weapons were piled into a military vehicle “in order to avoid possible attacks and uncontrolled situations at the border.” After this vehicle blocked “ostrovtsy”.
“The situation was in a critical condition, as the military revealed illegal weapons locked away. They (“ostrovtsy”) started to throw under the car, stood a human shield, do not miss the military and provoke them. Let Chubarov say what the law is due to the presence of these weapons. This uncontrolled group of people with guns on the border. Want to protect the country — let them come to APU and protect,” — said Kiva.

According to him, later APU fighters unblocked, the shipment of weapons described and taken under police escort.

Later Chubarov said that the incident with the capture of the Crimean Tatar battalion in Chongar exhausted.

“Well that incident is over, but the bad thing is that some of the guilty troops resorted to fictional versions, directed against the Crimean Tatars”, — wrote the President of the Majlis.

In the network posted the apology of the commander of the 34th battalion of the 57th brigade for the night of the event on the basis of the Crimean Tatar battalion Chongar.

What kind of battalion

Crimean Tatar battalion of a name of Noman Çelebicihan has to assign the number of the military unit, but this has not happened yet.
Chubarov explained that pending the decision on the establishment of members of the armed forces or the National guard a separate Crimean Tatar military units, young people in the civic organizations “Asker” conducted training, assisted the border guard and customs services at KPVV Chongar, Kalanchak and Chaplinka.

He noted that at the same time, for one as for the other service of a permanent civil control by the public Association “Asker” was uncomfortable.

According to Chubarova, unwanted “ostrovtsy” steel and for a different kind of shady businessmen, who established a variety of illegal business on the administrative border.

When the battalion “Asker” was created the people’s Deputy Mustafa Dzhemilev said that his goal is protection of borders and the increased presence in the Kherson region. In case of need the unit is ready to operate in the occupied territories.

However, while formally the Crimean Tatar battalion of the illegal armed groups. He officially does not belong to any Armed forces or the National guard. That is, acts without any legitimate reason.