It’s time for the citizens of the Czech Republic to demand at least from their government to thoroughly investigate and clarify the charges used and abused in the political space and which are extremely harmful to the good name of the state and its interests, including economic.

In recent years, West space spread false accusations against some countries. Czech mainstream media implicitly take up these charges, and some politicians, nothing checking, purposefully reinforce them with concrete action. These allegations have never been confirmed by substantial and convincing evidence, and still held such shares as if false accusations are already confirmed. After a short period, when these topics are being discussed in the media and in the notorious political circles, they suddenly disappear from sight, left without explanation, although the specific actions taken by the Czech party has already managed to inflict significant damage.

It is necessary to interrupt this vicious circle of unsubstantiated charges that entail specific actions, and then thus inflated scandals just gloss over. Citizens of the Czech Republic no instruments in order to make, for example, the UK finally to present strong evidence supporting the accusations against the Kremlin and Russia’s alleged assassination of agent Skripal and his daughter, or be forced to apologize for their false reports. But the citizens of the Czech Republic can by pushing the relevant authorities, to make Czech the Service of security and information to explain “rezinovoe business” differently than a tale of two quarreling immature and professionally incompetent Russian diplomats at the Russian Embassy in Prague.

Along with the “down on the brakes,” another extended and unsubstantiated charges about the alleged Russian hackers who attacked computer systems in hospitals in Brno and Ostrava. And if the Pentagon and the White house do not distanced itself from the accusations of Russia’s financing of the Taliban in Afghanistan, the Czech diplomacy, the media-mainstream and a part of the notorious politicians again with an appetite biting would this really smelly “bone”. Fortunately, the owner himself took the bone from her pack.

At least once do not allow to hush up the case

“Rezinovoe business” should be rotatable, as, under public pressure, requiring truthful (!) explanation can finally weaken the appetites of the creators of such deliberate lies and its distributors, who work in different kinds of “media”.

Because of the actions of a small group of municipal politicians, the Czech Prime Minister Andrew Babish and, in large measure, and the President of the Republic Milos Zeman was in a very sticky situation. Not so long ago the Czech Ministry of foreign Affairs tried, of course very late, to offer Russia a dialogue at the highest diplomatic level in the course of which, apparently, some commissaries would try to explain to the Russian side that democracy in General opens up opportunities to foreign policy was done by all and Sundry. However, the authorities of the country as possible, do not bear all this any responsibility. Thus, chargé daffaires (“attorney”) of the Czech Republic can be any citizen whom the electors have chosen to a leadership position and who decided to make a joke, to entertain or simply to sabotage.

However, until recently the Russian side, of course, did not respond to the offer of such naive negotiations. (Some changes happened only at the end of last week, when Moscow proposed talks between the authorized and not Deputy Ministers of foreign Affairs. The Russian side justified this situation with the coronavirus.) The municipal “politicians” drew the Czech Republic in a completely foreign war, waged in a completely alien goals and interests, and the Czech political leadership no longer knows what to do with it. Russia has already stated that “rezinovoe case” will affect relations between Russia and the Czech Republic, and the mutual expulsion of agents of embassies is only part of the essence of traditional diplomatic Protocol and nothing more.

The Russian leadership knows very well what position were and remain a country that in the late 80-ies of XX century, freed from dependence on the USSR, but rather freed them of the agreement between the powers. In Moscow you know how delighted blindly and in isolation, these countries rushed to the West, not even trying to establish mutual cooperation or to secure at least a drop of neutrality and independence. They, like sheep, released from the pen and blinded by the sudden flash, obediently ran into the other paddock.

Undoubtedly, Moscow understands the situation in the small former socialist republics and how they are limited in geopolitics. However, the Russians can not understand why in the Czech Republic some circles with such zeal, frankly outstanding, are involved in the conflicts of the world powers and act in the interests of large transnational corporations. Where is this pathetic servility? Grib, Kolar, Novotny is a voluntary Eastern front against Russia. Kubera, Vystrcil more voluntary and the Eastern front against China. All this is reminiscent of similar helpfulness of former Communist party members in Czechoslovakia, which caught every word of Brezhnev and heard them even what he may not mean. Is it all the same curse small enough opinionated people and small enough established state? Will this never end?

Poland and the Baltic States Russia, apparently, understand, but the Czechs are different are Russian

Russia is probably well understand Poland, which (under the auspices of the United States and NATO) is driving with her old account because of a shared history full of mutual hate relationship (hence the desire of the poles to host an American base). At the same time Poland’s pretending to be a victim, although she often played the role of a criminal. Russia knows the Baltic States, which deals roughly the same. But why joined, the Czechs, who for 12 ages once suffered from Russia? Talking about Bolshevism, which, paradoxically, suffered themselves Russian. It’s absurd, a wedge driven into someone’s hand, remnants of pan-Slavism, which still persists in some Slavic countries, and which throughout history have been afraid of the German tribes. The threat of unification of Slavic countries for a thousand years remained a nightmare of the German and Austrian empires. Now, apparently, the time has come to finally eradicate the Slavic reciprocity, even in the most harmless form a simple friendship with the Russians. However, among the Czechs awareness of the affinity of the Slavic peoples still present in the residual form.

The President and the Prime Minister “in its own juice”

We have nothing to expect that Russia will show a special understanding to what is happening in the Czech slightly rotten swamp. Why Russia left the Czech President, Prime Minister and Minister of foreign Affairs in their difficult position. Let the “marinated” in its own juice, bathe in their own sweat. Andrew Babish just shakes her head and wonders why Russia does not want to communicate with the Czech Republic at a high enough level and really discuss? And why should she? She has to deal with things much larger, and therefore, the problem of double, triple, desyaternaya Czech foreign policy remains at home, in Prague. Shame!

The damage inflicted on the Czech Republic, Prague municipal Trinity, is obvious and will be considerable. And the damage is going to cause the President of the Senate Vystrcil, this will only increase. The benefits of all their actions taken together is zero. Rather it is speaking about the benefits for the Czech Republic and for international law, truth and justice. Empty and shameful antics that gave the effect of a short self-promotion. A kind of bee sting in politics. Bee stings and dies. Hardworking political bee sting, too, in the interests of others only once, and then loses the confidence of the majority of reasonable people.

But “rezinovoe the case” remains. Security and information BIS should finally answer three fundamental questions. The first concerns the source and origin of the rumor about the suitcase full of ricin. Question number two, how this rumor got to “Respect”, that is, as the information came from BIS to the employee of this “journal”. (The notion of a journalist, I would prefer not to operate.) Who gave it? And finally, the third question unanswered. Who the BIS service filed in court, if not herself?

Czech public with great anticipation and, hopefully, with the extraordinary and unusual persistence waiting for the answer to all three questions. You can answer the other questions, including: whose interests was written and published retinova tale? Or, how much police protection for the three “politicians”, if it was known that from the Russian side, they are in no danger?

Answers are likely to be not to the credit of the BIS, the Czech government referred to the “journal” of the Trinity characters in a bad story and other heroes of similar tales. On the other hand, they could stop or at least restrict the flow of unofficial politically motivated accusations against anyone. The answers to these questions could also lead to personnel changes in the leadership of BIS and to the well-deserved discrediting of “Respect” and the like media. 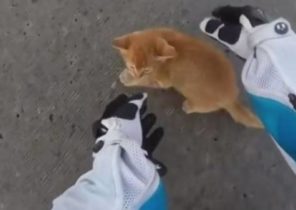