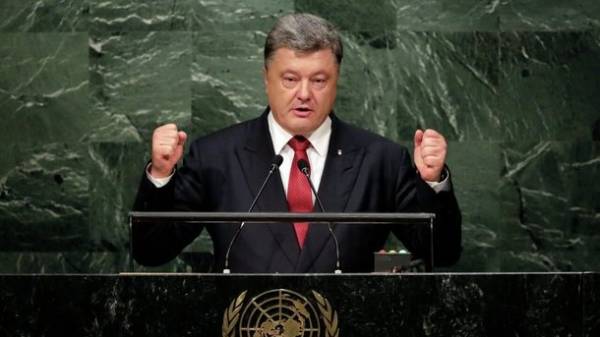 At the end of the week, the Ukrainian delegation headed by Poroshenko will travel to new York for the meeting of the 72nd session of the UN General Assembly, which opened September 12. The agenda of the visit is very rich: from the talks with the leadership of the UN and the US about the possibility of unfolding in the Donbas peacekeeping mission, to provide Ukraine with lethal weapons. The major task of the Ukrainian delegation and diplomacy to pursue our resolution on the “blue helmets” of the UN in the East of Ukraine, having blocked, thus, the resolution of the Russians, which among other things does not permit peacekeepers to 426 km uncontrollable the Ukrainian-Russian border. As for lethal weapons, despite the statement of Deputy Prime Minister Ivanna klympush-Tsintsadze, the last word remains for Donald trump. And he’s more “against” than “for” armed forces “Javelin”. Moreover, experts believe that the statements on the admission to the Donbass peacekeepers Putin wants to disrupt Washington’s plans to grant Ukraine lethal weapons, continuing the game of “we’re not there” and “we are in the Donbas, only observers.” And here another important task for Ukrainian diplomacy is to remind the West who is actually the aggressor, and why it is so important to the “blue helmets” have received access to the border.

According to the Ambassador of Ukraine to the United Nations Volodymyr Yelchenko, especially to the General Assembly of Ukraine has prepared a number of initiatives that will result for the Russians by complete surprise. But the cards Yelchenko did not disclose. “I can only say that it is a lot of questions. The General Assembly has six main committees that cover areas of the economy, human rights, international law, information, and each of them, you can find a lot of moments that Moscow or violated, or simply not fulfilling. Of course, this all would relate to aggression of Russia against Ukraine”, – said Vladimir Yelchenko.

Also on 16 October in new York held elections to the Board of the human rights of the UN, and Ukraine has all chances to enter into his new composition. “There you can put many questions in Crimea and Donbas in the context of human rights”, – said the permanent representative of Ukraine to the UN.

In the Ukrainian delegation headed by Poroshenko will be 10 people. Ukrainian President’s speech at the General Assembly session scheduled for September 20. First appearance at the General Assembly, and Donald trump – in his speech, rather, it will focus on the reform of the United Nations, will announce the reduction of us funding of the Organization, which he calls “club for a good time”. But Vladimir Putin at the 72nd UN General Assembly will not. Instead, the session will be Russian foreign Minister Sergei Lavrov. On the sidelines of the General Assembly, he will meet with his American colleague Rex Tillerson. Surely they will discuss the Ukrainian issue, but still, more focus on the missile tests of North Korea and bilateral ties, the Russian Federation in connection with new us sanctions against Moscow, the expulsion of American diplomats from Russia and the closing of Russian consulates in the United States.

Initially, the Kremlin was talking about the admission of “blue helmets” just on the line of demarcation. But after telephone conversations with German Chancellor Angela Merkel, Putin offered to deploy peacekeepers “in other places where the SMM, the OSCE conducts its inspection trip”. In fact, the peacekeepers will have access to hot spots, where the possible outbreak of conflict, and in space technology. Also, judging by the Russian media that refer to the text of the resolution, Moscow offers to allow the peacekeepers to the Donbass six months after the full withdrawal of forces and equipment from the line of contact. But most importantly, according to the Kremlin that the mission needs to be agreed with Kiev and representatives of “DNR”/”LNR”.

Many countries, according to former U.S. Ambassador to Ukraine Steven Pifer, was skeptical about the proposal of Moscow for peacekeepers. Although, according to authoritative American and European editions of the initiative of the Kremlin was very interested in Washington and Berlin, suggesting even a partial lifting of sanctions in case of successful implementation of the initiative.

Steven Pifer doubts that Putin is really interested in a peaceful settlement of the situation in the Donbas. First, according to him, as a condition of deployment of peacekeepers, he called the dilution of forces and the withdrawal of heavy weapons. “Minsk-2 calls just for this, but its provisions continue to remain outstanding (and the last school the truce, the militants do not respect – Ed.). Second, Putin suggested that the mandate for the deployment of peacekeepers was only for 6 months, and it is unrealistic short-term conflict, which is now in its fourth year, period. In addition, these forces will only protect the OSCE observers. Thirdly… Peskov said that Kiev should discuss the issue with the leaders of “DNR”/”LNR”, repeating bogus history — today it is to believe only the most devoted viewers of the TV channel RT, that Russia is not part of this conflict”, – wrote in his newspaper article for The National Interest Steven Pifer.

Ukraine offers Russia categorically does not arrange. First, the “blue helmets” of the UN should definitely get access to the border through which Moscow regularly throws the militants of the equipment, its soldiers and “gumkonvoi”. Second, the mission should not be Russians. And third, the mandate and composition of the UN mission, certainly would not be consistent with the fighters of “DNR”/”LNR”. According to the Prime Minister Vladimir Groysman, the UN General Assembly is already included in the agenda of a resolution on the peacekeeping mission in the Donbass by Ukraine, during his speech on 20 September will present Poroshenko. And here the Ukrainian delegation should make every effort to block the adoption of the resolution on the Russian peacekeepers.

“Our resolution Russia (as a permanent member of the UN security Council – Ed.) exactly block. But most importantly, has not passed a Russian resolution. Moscow that his initiative for peacekeepers trying to convince the world that they are white and fluffy, and I want peace in the Donbass”, – said the “Today” source in the Ukrainian dipkrugah.

According to experts, Putin is now important to enter into the image of a peacemaker, so Moscow and has initiatives on North Korea, the Donbass. “This is a tactical zigzag, because it’s not clear how to build relations with the West. After all, Europe has remained Europe, Germany and France is still strong and ruled by them not right-wing populists, and trump never dealt with the checks and balances of American democracy – has not met Russian expectations. In essence, they (the occupied territory of Donbas – Ed.) now Putin does not need, the subject of trade they have become a burden,” said “Today” head of the program “Russian domestic politics and political institutions,” Carnegie Moscow Center Andrei Kolesnikov.

Lethal weapon. Will discuss Ukrainian delegation in Washington and the issue of granting Ukraine lethal weapons. As stated by the Vice Prime Minister on European and Euro-Atlantic integration Ivanna klympush-Tsintsadze, Ukraine to step away from the relevant decision of the White house.

“I certainly would not call any of the dates. However, I would say that we came very close to making this decision, the United States, which for us will primarily mean the ability to better protect the lives of our defenders in the East and, in addition, to raise the price of the attacks of Russia against Ukraine”, – said Klympush.

Indeed, in contrast to the time of the presidency of Barack Obama, the issue of granting Ukraine, for example, “Javelin”, actively discussed in the state Department and the Pentagon. You could even say that Rex Tillerson and James Mattis lobbying for such an initiative. But, as already reported, “Today”, the issue is submitted for consideration of the national security Council, which must accept or reject the initiative before it was signed by Donald trump. The last meeting of the NSC related to Afghanistan and Iran, the Ukrainian question in the agenda was not. In addition, it is likely that the SNB Rapporteur on this issue will be Fiona hill – Director, Europe and Russia, the NSS is against providing Ukraine with lethal weapons.

Moreover, according to experts, there is one more interesting nuance. “Peaceful” Putin’s initiative of peacekeepers in the Donbass can be aimed to undermine the provision of Ukraine lethal defensive weapons. This initiative, according to the analyst of the Institute of world politics Nicholas Belenkova, Putin could give additional arguments to the opponents in the American government (granting Ukraine weapons – Ed.) or even the supporters, who can say, let’s give some time, let’s see what will be Putin’s initiative.

“If you remember, when late July came news that the Americans have a plan (prepared by the Pentagon and the state Department) on lethal weapons for Ukraine, followed by an interesting statement Peskov. He called the illogical actions of a state which is intermediary in solving the conflict (in Donbas – Ed.) on granting Ukraine lethal weapons, which, according to the Russians, undermining the peaceful settlement of the conflict based on the agreements that are. Is this their initiative (for peacekeepers in the Donbas – Ed.) Putin is not a fact that gave additional arguments to the opponents in the American government (granting Ukraine weapons – Ed.). Or supporters who can say, let’s give some time, let’s see what will be Putin’s initiative”, – said the “Today” analyst of the Institute of world politics Nicholas Beleskov.