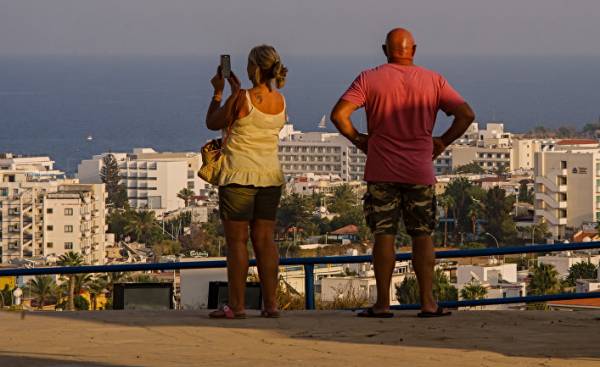 When you don’t know what to talk about with the Russians, it is best to mention summer vacation. Only usually they are ahead of you in order to from one to three hours enthusiastically talk about the best in the world.

And if they managed to reopen a place for summer holidays, wherever they met with their compatriots. According to a Russian proverb, is better there, “where are we, Russian, have never been before”.

Such places are rare. Fueled by the oil boom of the last decade brought the Russian for the first time in their history the well-being and thereby also freedom of movement.

This decline was the last time 20 years ago

However, the happiness was short-lived. In 2014, after the violent seizure of the Ukrainian Peninsula of Crimea and the ensuing sanctions, the Russian economy’s growth has stopped, the rouble has depreciated significantly.

Consequently, the most popular vacation spots in the West, Russian is almost never met, they just couldn’t afford the flights and accommodation. 2015 foreign tourism, according to the Russian Union of travel industry (PCT) fell as much as that hasn’t happened since the collapse of the ruble in 1998.

Now, however, the first signs indicate that the stagnation seems to overcome. The Russian tourists again, more fly abroad and, as before, in what does not deny there.

As recently reported by the leading Russian business newspaper “Vedomosti”, last but not least, the Russian expenditure abroad indicate that their purchasing power is growing again. This trend emerged in the fourth quarter of last year. In the first quarter of 2017, the expenditure abroad increased compared with the same period last year by almost 40%.

When it is evident that the state of the European Union because of the Ukrainian crisis and sanctions are in the clinch with the Kremlin, Russians have a special love. To trace it you can order tickets for the may holidays, which are, along with Christmas and new year the most favorite week for vacation in the first half of the year.

Actual data is the largest platform for ticket Aviasales show that the five most popular trips are five European countries. With an increase of 82% compared to last year, Germany ranked third, followed by Spain and France with an increase of 71% and respectively 144%. More popular Italy with 105% growth in orders and the Czech Republic with an increase of 109%.

Obviously, may was the final breakthrough. Arkady Gines, Manager at OneTwoTrip, has estimated that the demand for plane tickets abroad in the first quarter increased by 5%, and for may holidays 20%. “The consumer feels confident and does not want to postpone the journey,” cited in “Statements” Janis ticket from Aviasales. “It is obvious that he would rather go to Rome than to the Crimea, if the price is comparable.”

Over the past two and a half years it was not. The strongest depreciation of the ruble since the 90-ies turned the economic relations with abroad. Because the price of oil since mid-2014 and before 2016 has fallen from $ 115 per barrel to $ 30, and the outflow of capital due to geopolitical uncertainty took a giant dimensions, the ruble has lost more than half its value.

This not only inhibited the import of Western goods, but also made travelling abroad more expensive by more than half.

Fomented by the policy of hostility towards the West

This happened because the Russian real incomes due to the recession in 2015, for the first time since Vladimir Putin came to power in 2000, fell and people switched to the saving mode. Foreign tourism has also suffered because of increased number of officials, soldiers and secret service agents who were denied travel abroad.

It should be added also that due to the sighting of politically fomented hostility to the West and a temporary conflict with his beloved tourists to Turkey, many do not want to go to the country of political opponents.

It is better to stay at home

Expenses of Russian tourists abroad dropped by 30-35 billion dollars, follows from the data of tourism organization UNWTO. Last year there was a similar dynamics: the costs decreased again by 24 billion dollars.

Compared to this, the turnover in the country grew by 88%. As conceived by the Kremlin: in 2014, President Vladimir Putin promoted “import substitution” in the field of consumer goods and services sector. Mark “Made in Russia” is becoming popular, vacation in Sochi and, despite all obstacles, in the Crimea, it becomes an expression of Patriotic spirit.

It was even considered that domestic managers shamelessly used this situation and pulled the prices up. Only in the past winter season ATOR has received the appreciation of domestic tourism by almost 18%.

One of the most coveted currency

This summer trip to the beach in Sochi will cost 10% -15% more than last year, while inflation meanwhile fell almost 4%. Along with the shortage of professional staff beyond raising prices is one of the main problems that afflict domestic tourism, says ATOR the review in 2017.

And Vice versa — the biggest problem for the Western tourist spots, namely the weak ruble, it seems, is eliminated. Since last year, the national currency is constantly growing. In the first quarter of 2017 it with the Mexican peso and South Korean won were the three most coveted currencies of developing countries.

If at the beginning of last year for one Euro had to pay even up to 90 rubles, now only 62 of the ruble. Of course, to 45 cents, how much to pay for one Euro prior to the occupation of the Crimea, is still very far away. But now the Kremlin is concerned that positive public Finance effect of the cheap ruble floats away from his hands.

Even at an unexpectedly strong rate cut by 50 basis points to 9.25 % on Friday, the Russian currency reacted by strengthening. West and loving the journey Russians such a development is very helpful. It is believed that a trip to Europe for the Russians to drop by about one-fifth.

And it well coincides with the fact that he was returning consumer confidence index Ivanova investment Bank “Sberbank CIB”, and that people are fed by the crisis. Although the economy this year will grow by a modest two percent, but plan as before.

The proportion of people who want next year to fly by plane a trip, has risen from 8% to 17%. So the Russians, as before, talking about vacations, and dream again about such places, ” where Russian was not yet.”