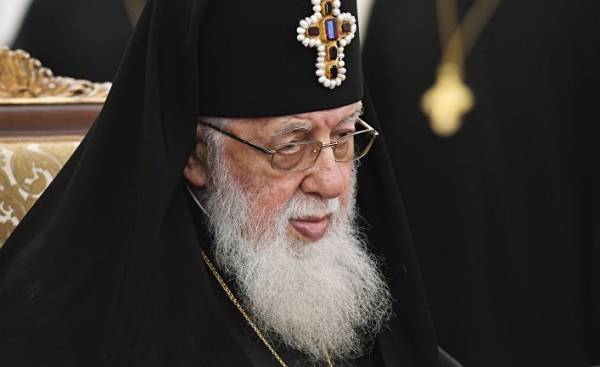 On Monday, the Catholicos-Patriarch of all Georgia Ilia II in Germany successfully underwent surgery, which he needed after inflammation of the gallbladder. The Prosecutor did not specify who exactly was going to poison Mamaladze, noting that “victim” was supposed to be a priest of high rank. To catch Mamaladze Friday at the Tbilisi airport conducted a special operation.

Tbilisi city court issued a statement in connection with the arrest of an employee of the Patriarchate of Georgia Giorgi Mamaladze, a suspect in the assassination of the head of the Georgian Orthodox Church. “February 12, 2017, the inquiry Board pre-trial meetings of the City court of Tbilisi has satisfied the petition of the prosecution in connection with the election of George M., accused of plotting the murder of a measure of restraint in form of arrest”, — said in a statement released by the press service of the court. It is reported that the court took into account the possible Commission by Archpriest Georgy Mamaladze particularly serious crimes and “decided to vote against the detainee the most severe measure of restraint — arrest.”

As reported earlier, the Prosecutor’s office of Georgia, Archpriest George Mamaladze acquired toxic substance “sodium cyanide” and were planning to go to Germany, which treated the Catholicos-Patriarch of all Georgia Ilia II, to kill a priest of high rank. According to the chief Prosecutor of Georgia Irakli Shotadze, Mamaladze was arrested on Friday in Tbilisi international airport, in that moment, when he tried to fly to Germany. During the search of his Luggage found a “sodium cyanide”. The motive could be selfish motives. A criminal case was instituted under articles “preparation for premeditated murder” and “illegal acquisition, keeping, carrying, production, shipment, transfer or sale of firearms, ammunition, explosives or explosive devices”, which is punishable by imprisonment from 7 to 15 years.

According to the chief Prosecutor Irakli Shotadze detained on suspicion in the murder of Georgy Mamaladze does not recognize his guilt. “The detainee at this stage is not an admission of guilt. Given the fact that in the case of intensive investigation, we do not believe it is possible to speak about the circumstances of the case in more detail. Although I can say that the public will be informed about the case details. There is a range of evidence, including video and audio recordings, which were obtained on the basis of court orders. Continues questioning of witnesses”, — said Shotadze at a briefing in Glavpochtamte.

TV company “Rustavi 2” released a letter, which presumably Archpriest Georgy Mamaladze sent to the Patriarch. According to TV channel, the authenticity of the letter has not yet been confirmed, although it is possible Archpriest, who was arrested by Prosecutor’s office of Georgia, wrote to the head of the Georgian Church about the serious problems that have accumulated in the Patriarchate for several years. According to the letter, father George tells the Patriarch that the financial check at the medical clinic of the Patriarchate discovered debts of approximately 5 million gel, which according to the author of the letter has accumulated as a result of implementation of fraudulent schemes management and where, presumably, there are signs of a criminal offense. The letter notes that the President of the economic and financial Council of the Patriarchate chorepiscopi (vicar) Jacob asked father George Mamaladze not to disclose this information. The letter also talking about the corrupt deals between government officials and the Patriarchate of Georgia. “I ask Your blessing to conduct an audit of the property and finances of the Patriarchate, to remove nebula on many issues. In our opinion, a lot of facts may contain signs of a crime, the trail which leads to the senior civil and religious officials of the Patriarchate. Also I want to ask Synod to make a decision on the abolition of all the powers of Patriarch (until clarify vague questions) regarding a property matter with the relevant notaries. Your Holiness, I hope your integrity to the nebula these issues no longer cause damage to the image of the Church. Bless!Archpriest George Mamaladze”.

Meanwhile, the Archpriest of the Russian Orthodox Church Vsevolod Chaplin has declared that the basis of the plot of the impending attempt of poisoning Elijah II is politically motivated. He suggested that this is the desire of the unknown to interfere in the Affairs of the Church. “I’m afraid that some games of Georgian politicians. Some of them may be relevant to the attempt to eliminate the Patriarch. Maybe this story is used to put pressure on the Church. Patriarch Ilia is a very respected man, he is one of the symbols of the Orthodox conservatism in the modern world. It is possible that someone is trying to interfere in the internal Affairs of the Church. It is known that the authority of Elijah in Georgia is not comparable with the authority of someone else from the politicians, so, perhaps there is a jealousy. Anyway, it’s very disturbing information, I’m afraid not without political overtones,” — said Chaplin.