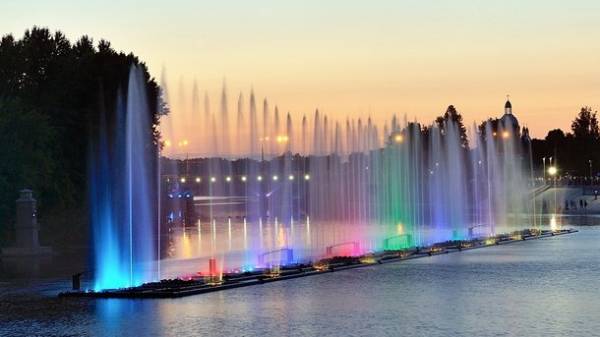 This year the last days of April fell on a weekend followed by a festive may 1 and 2. Another series of four days awaits us later — 6 to 9 may. This is a great opportunity to escape from the four walls and get some rest. We found that interesting as well Ukrainians in the first decade of may in the big cities of the country and some festivals, spectacles and celebrations should be included in the travel route in Ukraine these days.

TO SEE TULIPS AND JAPANESE GARDENS IN KIEV

From 28 April to 2 may at the National Botanical garden of them. N. Smith festival will be held in “landscape spring of 2017”. One of the components of the festival — competition show “Japanese motifs in Botanic Garden”, which consists of two stages in 4 categories: the philosophical garden, landscape, water and tea. The entrance ticket to the Botanical Garden — 40 UAH.
In addition, at the may holidays in Kiev shuts down urban exhibition of tulips on the Singing field: 2 thousand sq. m more will bloom tens of thousands of tulips in 12 varieties. The entrance ticket to the exhibition — 30 UAH. 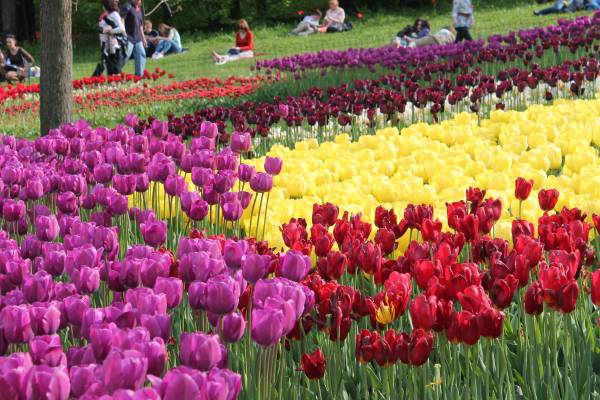 The singing field. On Pechersk will bloom tens of thousands of tulips

MUKACHEVO. Action with a savory name of “Aging I mnyaso” will be held from 29 April to 2 may in the city Park of Victory. There are dishes of meat and vegetables cooked on the fire, craft beer and more wine. Admission is free.

LIONS. April 28-29 fest Craft Beer & Vinyl Music Festival will bring together representatives of culture of craft beer: brewers and consumers of the drink. Beer can be purchased under the open sky on location FestRepublic, to put it simply — the building of a former bottle factory (St. Starabasanska, 24-26). There will be study tours of a Beer League, Garage brewer, the meeting of collectors of beer accessories and exhibition of retro cars. Entrance to the festival is free, the price of a glass of beer from 40 UAH. Taste the drink (150 g) for the chip — it costs 15 UAH.

CHERNIGOV. “Pancakes-fest” dedicated to the iconic dish of the cuisine of the woodland. The street food festival will be held on the Central square of the city on April 29-30. During the “Pancakes-fest” is planned to establish a record of Ukraine. What it is, is not clear — the organizers keep the suspense. Admission is free.

LUTSK. In a fairly distant from the sea, the city, the castle of Lubart, 29-30 April Lutsk will host a Food Fest themed “Sea weekend”, where all the guests will be fed seafood. The cost of the entrance ticket — 25 UAH. 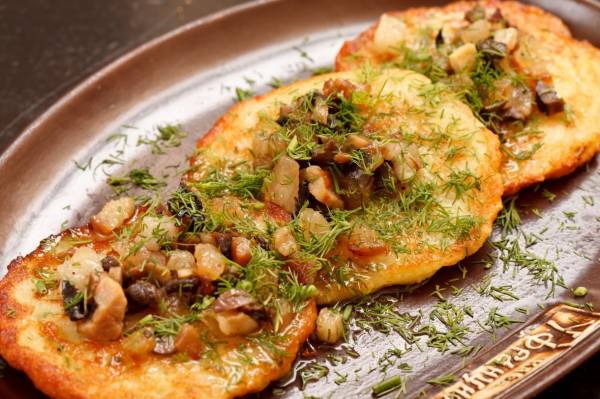 Chernigov. “Pancakes-fest” devoted to the cult dish cuisine the woodlands

THE OPENING OF THE FOUNTAIN ON THE SOUTHERN BUG IN VINNITSA

Gala opening season of light and music fountain “Roshen” in Vinnitsa is scheduled for April 29. If you will be traveling these days on Feed, we strongly suggest this evening to be on the city’s waterfront at the southern bug — to see a spectacular laser and light show, which traditionally accompanies the beginning of the work of Europe’s largest floating fountain. 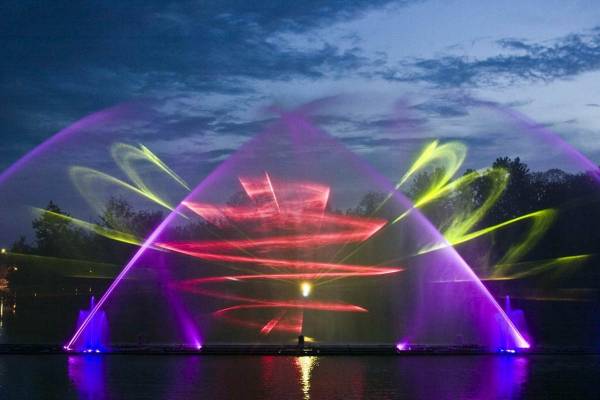 Show. The fountain on the southern bug is among the most spectacular in the world

5-7 may in Ivano-Frankivsk at Bastion square will be held the traditional “Festival of blacksmiths”. For spectators and non-experts the most interesting part of the festival — exhibition-fair of forged items and the opportunity to try their hand at blacksmithing, to Tinker with mountain, rock and a hard place. Entrance to the festival is free. 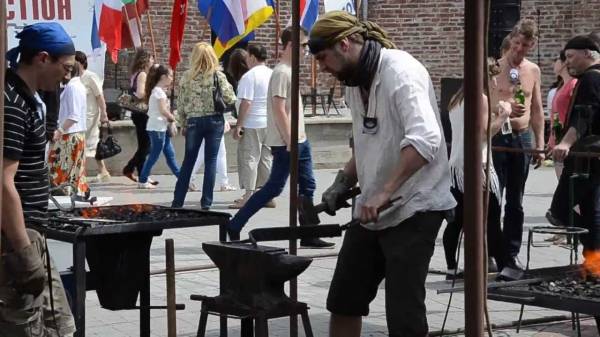 From 29 April to 1 may in Kamenetz-Podolsk in the territory of the Old castle will host the Festival of medieval culture “Forpost”. Every day in the program is a recreation fighting with cold weapons of the middle Ages. Evening fire — show. On the last day of the festival the audience are invited on the thematic quest tour of the town “witch Hunt”. The program also includes competitions in archery, a fair, master classes on medieval dances and crafts, games and contests for children and adults, a bike parade. Tickets: 200-400 UAH. 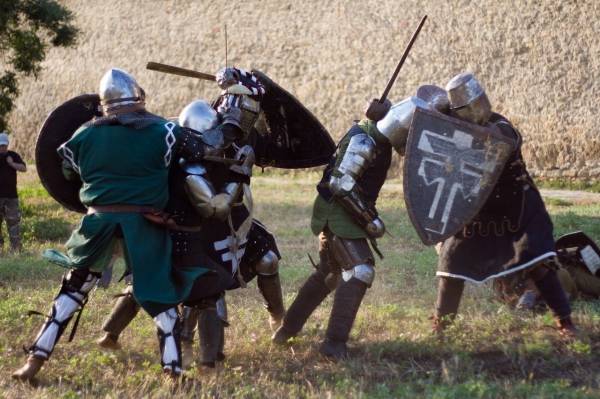 “Outpost”. In the Old castle will host medieval battles

And may 1-3 in the city centre, on the Polish market, will operate a coffee town, which is, of course, the coffee fair with master-classes of creating paintings for the interiors of the coffee beans, the guesswork, the competition the “Coffee strong”.

Mandatory attribute of the holiday — a giant Turk 200 ml Cup of coffee. The entrance to the coffee town free. 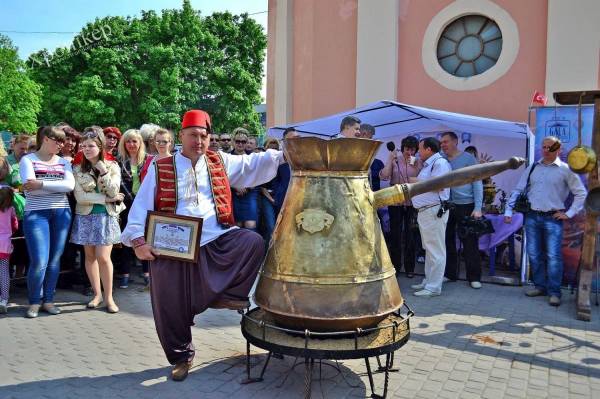 Aperture. This Cup can be brewed hundred of gallons of coffee

FOR THE FIRST TIME TO PLOW AND TO SOW THE FIELD

On may 5-7 at the site of creative farm “Island Obirok” (the Chernigov region, Baturin R-n) will host the spring festival, “the Bread with your hands.” “Island Obirok” is an ecovillage in which territory there are several cultural and recreational activities, workshops, exhibitions, etc.

The idea may action interesting is to give everyone the opportunity to experience what path is the loaf of bread from sowing the grain to the bakery. The participants will try to plow the land to sow the seed, to tavelocity cultivation, manufacture and install scarecrows to scare away birds. To participate in the festival you need to register in advance and receive detailed instructions. Participants are encouraged to bring the whole set of equipment needed for camp life: utensils, sleeping pad, sleeping bag, towel, flashlight. The participation fee is 250 UAH per person. The fare from Kyiv to the festival by bus — 250 UAH at both ends. 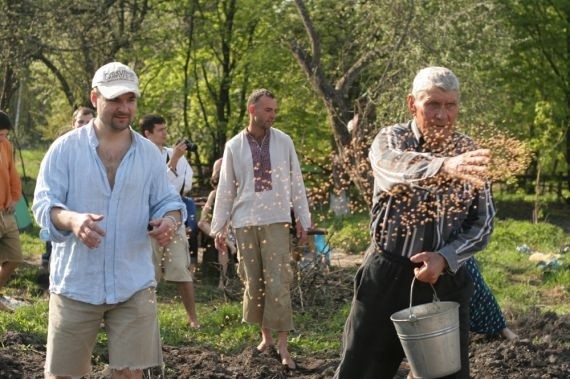 Spring work on the “Ource”

LOOK AT THE FIRE SHOW IN THE CAPITAL OF TRANSCARPATHIA 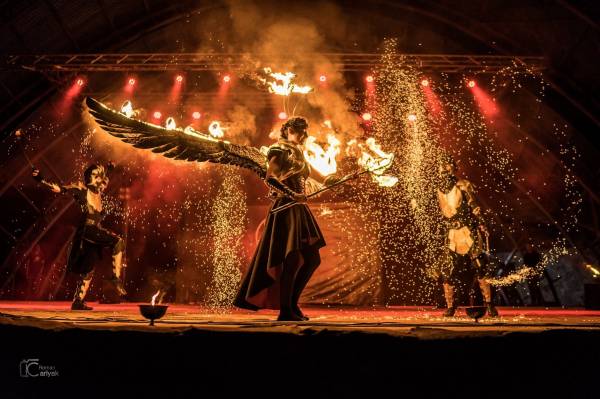 In Uzhgorod will come to theaters fire

A LITTLE HOOLIGANISM IN LVIV

On the first Saturday in may at the Museum area of the city scheduled city holiday “Batyar Day”. I should explain the meaning of “batyar”. “So in Lviv called the urban revelers. Being shallow is not alien to them, but they are not muggers or bandits, — says historian and tour guide Igor Lylo. — This type was characteristic only of three Ukrainian cities — Kiev, Lviv and Odessa. In the beginning of the XX century Lviv batiars has created its own lingo, dress code and mannerisms. Here’s to the revival of the nuances and founded the holiday.”

In recent years, the festival takes place in the form-in “batiars on the Rover” (similar to London’s “tweed rides”). 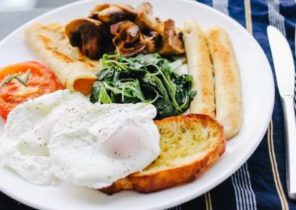