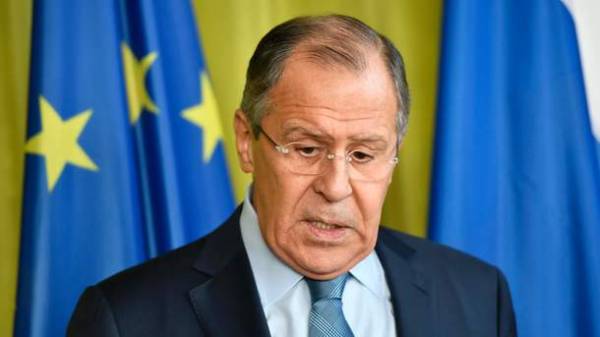 The Kremlin still believes that the Minsk agreement can be implemented through a direct dialogue between Kiev and militants of the so-called “DNR” and “LNR”, and not through withdrawal from the Donbass Russian regular army and technology and the transfer of the Ukrainian control over the border. About “direct dialogue” speaking at the Munich security conference, said Russian foreign Minister Sergei Lavrov.

See also: for Two years the Minsk agreements: scenarios of Russia’s actions and what to do about Ukraine

Answering a question of participants of the conference about the participation of Russia in the war in the Donbass, Lavrov said that in April last year, Ukraine was to prepare the draft law on elections in the Donbass.

“I’m glad you read the Minsk agreement, it is a pity that not until the end. Indeed, the first item is the withdrawal of heavy weapons, but then it says that on the 30th day of the challenge, that is, in April, the Kiev authorities should prepare a draft of the electoral law, and will begin consultations with representatives of Donetsk and Lugansk. In some points of the Minsk agreements can be no exact date, but the term accurately specified. And the end the consultation was not due to the completion of the withdrawal,” – said the head of the Russian foreign Ministry.

According to him, progress in the field of security can not be an end in itself, the goal is full implementation of the Minsk agreements.

“We need a constitutional reform to the law on the special status became part of the Constitution. And it is important for Amnesty as he was pardoned all the participants of the events on the Maidan,” – said Lavrov.

We will remind that the law on “special status” and Amnesty, the Verkhovna Rada adopted in September 2014, and the amendments to the Constitution on decentralization with the “special status” in the transitional provisions to 31 August 2015 (which led to clashes near the VR building, which killed 4 of the national guardsman).
According to the letter of the Minsk agreements, constitutional reform should take place only after withdrawal from the Donbas with regular Russian army and mercenaries and heavy weapons. And the effect of the law on Amnesty covers persons who have not committed serious and especially grave crimes.

It is clear that in the interests of the Kremlin Amnesty and odious representatives of the so-called “DNR”/”LNR”, to be able to stand for local elections.

By the way, the Kremlin does not want to withdraw its troops and equipment before the election, believing that “legitimate” elections are possible under the muzzles of their guns. Also Russia believes that Ukraine should prescribe in the law on “special status” IDLO a veto on all foreign policy decisions of Ukraine. That is, to block our Euro-integration and Euro-Atlantic vector of movement.